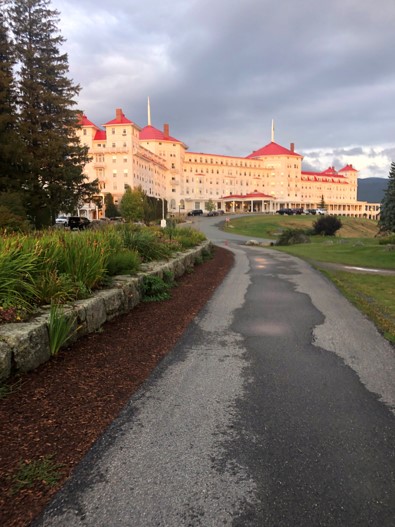 The Mason Contractors Association of America (MCAA) mid-year meeting was at the Omni Mount Washington Resort in New Hampshire last year.  Ground was broken for the construction of the resort in 1900 and the doors were opened in 1902.  Built in the remote White Mountain National Forest it is a testament to the planning and organization required to go from groundbreaking, to door opening, in a period of 18 months during a time when there were no major highways, trucks, and communication was limited.

In the last few years, job site survey and scaffold plans have become frequent requirements of many general contractors/owners. Not only do they want to know what type of equipment you are using, but it can also get into as much detail as to where trucks are to be staged while unloading and what precautions are taken to unload the truck. While job site plans can be burdensome, especially initially, they can also be a valuable tool to reduce downtime, accidents, and work stoppage thereby increasing productivity and profitability.

The EZ Scaffold Job Site Survey, which should be completed by a ‘competent/qualified person’, establishes vital information which is used to create the plan (example: using scaffold of course!):

A complete plan leads to a method for the erection and dismantle of the scaffold.

It is vital that the person carrying-out the job survey has the relevant experience to be able to fully plan a safe installation and the job knowledge to specify what is required.

Job site conditions – power lines, canopies, obstructions.  Many times, we arrive on a job to provide training and are unable to install scaffold due to conditions that could have been prevented with a job site survey.  Instead, installation was delayed, and the job already started in the hole.

The method of tying – Similar to the items above, knowing how you are going to tie off is vital to getting the scaffold installed on time and safely.  This is also something that should be approved in writing by the Engineer of Record or another qualified person.  A condition that could delay work, or worse, result in work being done on platforms that are not safe.

The ground conditions – This has probably resulted in longer delays than any other part of the survey.  In the past we have had to dig up bad ground (on restorations), get larger pads, and get a shoring plan expedited.  All of these delays could have been prevented.

The identification of hazards – power lines, traffic (both public and job site), falling object protection, etc. This is a form of written communication with the GC/Owner that should require a written response.  Written documentation would have prevented work being
done next to live power lines.  The GC told us that the power lines were de-energized only
to find out from the utility company that this was not the case (fortunately before anyone was hurt).

Imagine the planning that was required to build the Omni Mount Washington Resort, where a round trip to the city may have taken a week.  Today, labor is more expensive and there is more work than ever.  Delays not only result in increased labor costs but can also postpone getting to other jobs, resulting in lost profits. The customers we have that spend time planning and keeping jobsites clean and organized, are often the most successful.  The EZ Scaffold Job Site Survey is a tool that can help make your job profitable and safe.

Why should we support local businesses?

Item added to your cart

Continue Shopping Go To The Cart